Since I'm building a hybrid systems/networking lab, one of the key features I'll need is a serial console server to administer the lab switches. There are a few options here:

The last one is interesting, here's why. I have an ansible server that I intend to use for most patching/administration tasks, and to trial out certain aspects of network automation, and ansible lists a very interesting feature, proxies:
https://docs.ansible.com/ansible/latest/user_guide/playbooks_environment.html
I could plausibly list the ansible VM's loopback address as a proxy, allowing me to use it to automate early-stage network provisioning without network connectivity. I know it's a petty thing to want to automate, but that particular aspect of network devices provisioning is pretty tedious, you have to:
#1 is a pretty slow task, and I'd like to automate it - it'd be great to let ansible babysit switches while they provision instead of having to be right there building on it the entire time. These are pretty simple tasks for most route-switch platforms - typically only requiring a binary copy and a reboot or two.

Anyhow,  let's get down to configuring the basics. I'm performing this from the vCenter 6.7 GUI, so YMMV on user interfaces. All you have to do is plug in your USB-to-Serial adapter, and then add it to the VM as a "Host USB Device." I'd recommend FTDI-type adapters, they don't typically require any driver install to work on either ESXi or Linux. 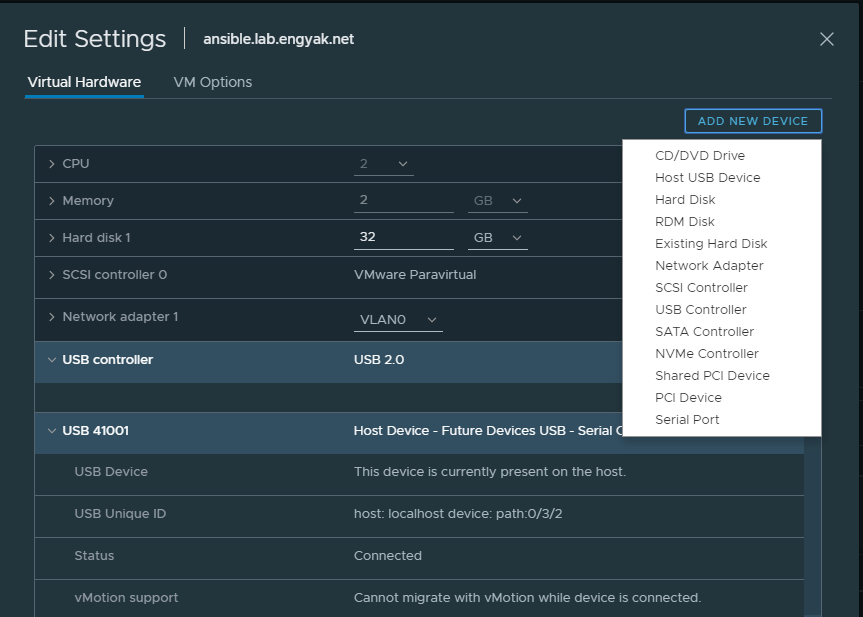 Now, let's see if they show up:

We're all set! I typically use screen as a direct console emulator, but they all more or less do the same thing. At this point we're really just trying to test the console ports to see if they work:
Looks like we're fully functional on all serial ports - I have 3 unprovisioned WS-C3560-24-TS-E for future lab use. The last commmand was to ensure that the proxy software wouldn't have to compete with screen for ownership of a serial device.

We'll be installing ser2net next - it only supports telnet, but you can tunnel SSH in a prod environment. Honestly, if you want this in your work environment it'd be much better to use a dedicated console server - 48 ports will net you less than a Dell R430, and can connect to phone lines. They're worth it.

Then we create a config file:
# Default value settings. The given values are the defaults. For non # boolean values the possible values are given above. # #** serial device and SOL ** # speed: standard speeds shown above #DEFAULT:speed:9600 # databits: 5,6,7,8 #DEFAULT:nobreak:false #** serial device only ** #DEFAULT:databits:8 # stopbits: 1,2 #DEFAULT:stopbits:1 # parity: none, even, odd #DEFAULT:parity:none #DEFAULT:xonxoff:false #DEFAULT:local:false #DEFAULT:hangup_when_done:false #DEFAULT:kickolduser:false And we're set! Systemd will automatically start ser2net with the VM.
at March 03, 2019
Email ThisBlogThis!Share to TwitterShare to FacebookShare to Pinterest
Labels: FOSS/Linux, Routing & Switching Studies, VMWare