Now that the primary infrastructure components for NSX-T are in place, it is now possible to build-out the actual functions that NSX-T is designed to provide.

A friendly suggestion, make sure your Fabric is healthy before doing this: 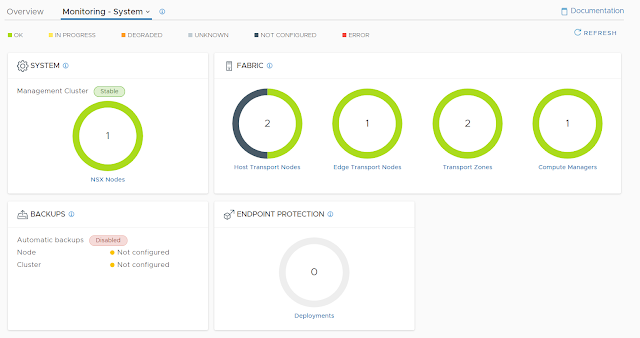 NSX-T differs from NSX-V quite a bit here. Irregular topologies between edge routers aren't supported, and you have to design any virtual network deployments in a two-tier topology that somewhat resembles Cisco's Aggregation-Access model, but in REVERSE.

The top tier of this network, or as VMWare calls it in their design guide, Tier-0, the primary function provided by logical routers in this layer are simply route aggregation devices, performing tasks such as:
The second logical tier, Tier-1 is automatically and dynamically connected to Tier-0 routers via /31s generated from a prefix of your choosing. This logical router will experience a much higher frequency of change, performing tasks like:
Before implementing said network design, I prefer to write out a network diagram. 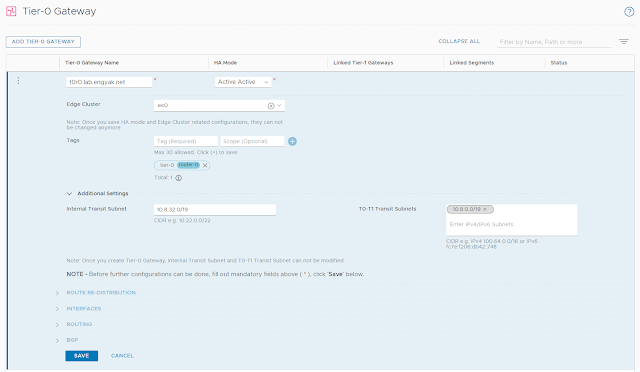 We'll configure the Tier-0 router to redistribute pretty much everything: 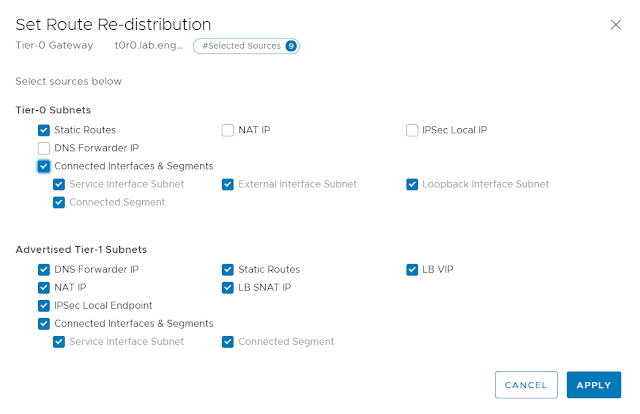 Oddly enough, we have spotted a new addition with 2.5 in the wild - the automatic inclusion of prefix-lists! 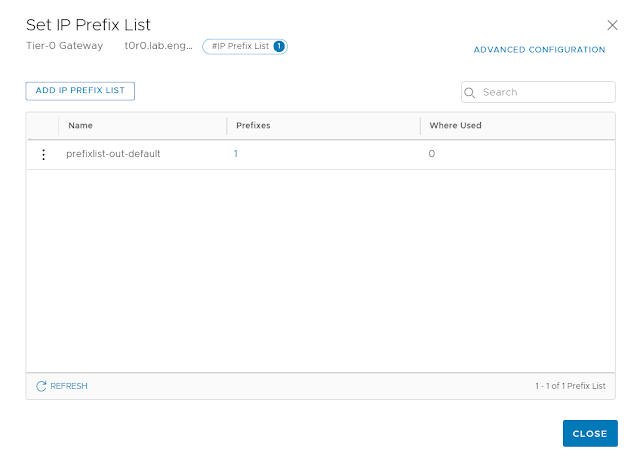 We also want to configure route summarization, as the switches in my lab are pretty ancient (WS-3560-24TS-E). I'd recommend doing this anyway in production, as it will limit the impact of widespread changes. To pull that off, you *should* reserve the following prefixes, even if they seem excessive:
I did so below, and it makes route aggregation or summarization EASY. 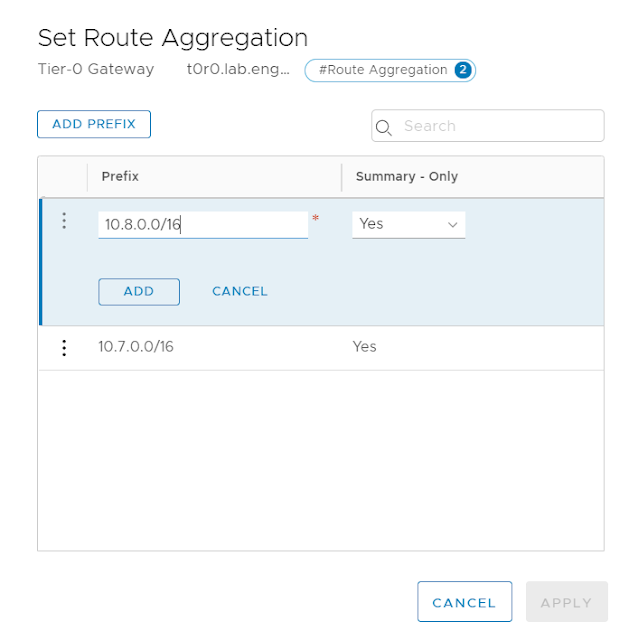 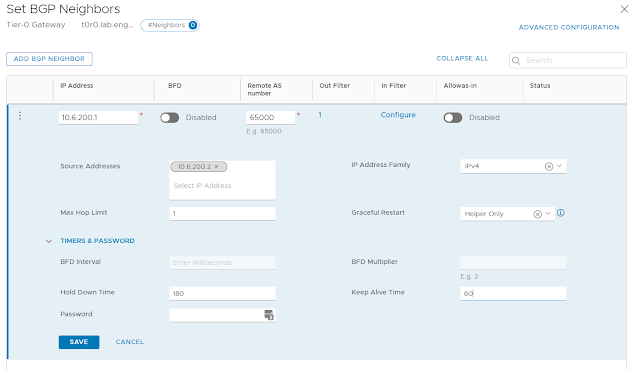 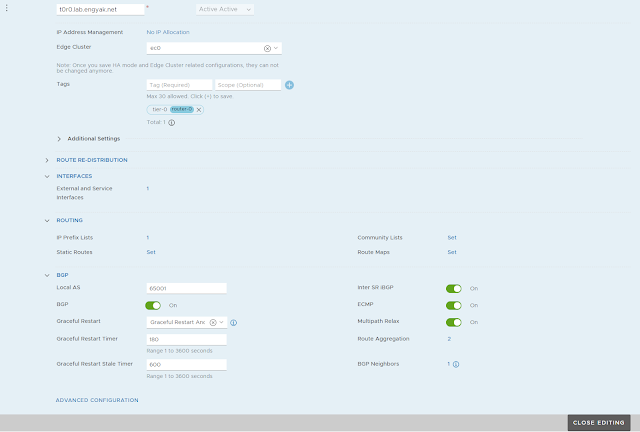 At this point, we want to save and test the configuration. It'll take a while for NSX-T to provision the services listed here, but once it's up, you'll see:

Check for advertised routes. Only routes that exist are aggregated, so you should only see 10.8.0.0/16: 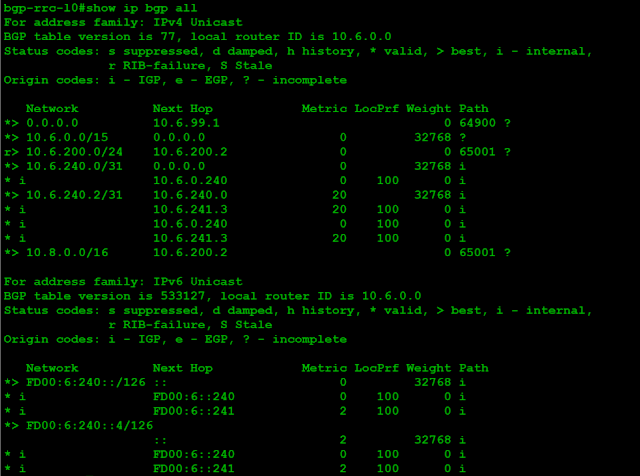 As a downside, I have prefix-filtering to prevent my lab from stomping on the vital pinterest and netfix network, so I had to add the new prefixes to that: 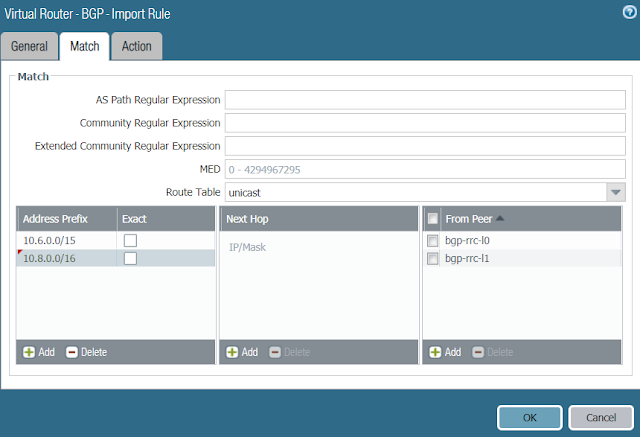 That was quite a journey! Fortunately, Tier-1 gateway configuration is MUCH simpler, initially. Most of the work performed on a Tier-1 Gateway is Day 1/Day 2, where you add/remove network entities as you need them: 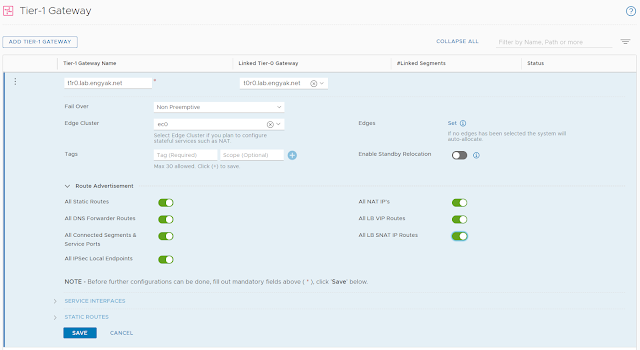 Let's add a segment to test advertisements. I STRONGLY RECOMMEND WRITING A NAMING CONVENTION HERE. This is one big difference between NSX-V and NSX-T, where you don't have this massive UUID in the port group obfuscating what you have. Name this something obvious and readable, your future self will thank you. 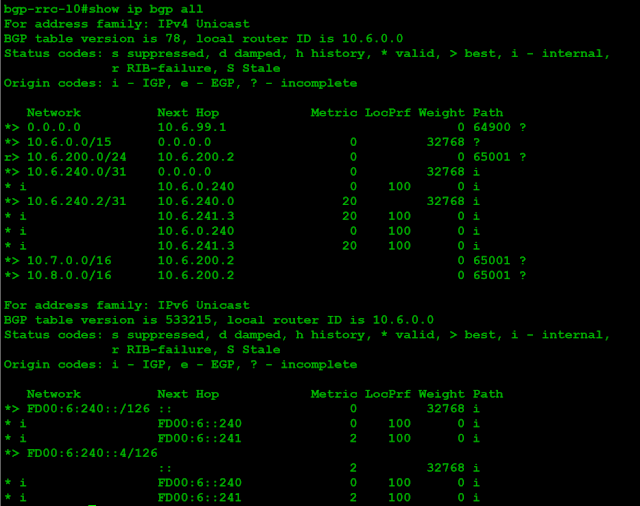 As I previously mentioned, these segments, once provisioned, are just available as port-groups for consumption by other VMs on any NSX prepared host: