What happens to packets with a VMware vSphere Distributed Switch?

Distributed Virtual Port-Groups (dvPGs) in vSphere are a powerful tool for controlling network traffic behavior. vSphere Distributed Switches (vDS) are non-transitive Layer 2 proxies and provide us the ability to modify packets in-flight in a variety of complex ways.

Note: Cisco UCS implements something similar with their Fabric Interconnects, but software control of behavior is key here.

Where do the packets go? 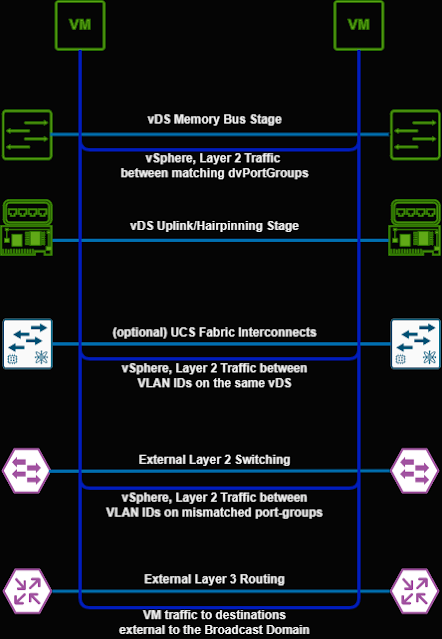 ESXi evaluates a combination of source and destination dvPG/MAC address conditions and will ship the packet to one of the following "stages":

vDS tries to optimize VM-to-VM traffic to the shortest possible path. If a Virtual Machine attempts to reach another Virtual Machine on the same host, and same dvPG, ESXi will open up a path via the host's local memory bus to transfer the Ethernet traffic.

This hypothesis is verifiable by creating two virtual machines on the same port-group. If the machines in question are on the same host, it will not matter if the VLAN in question isn't trunked to the host, an important thing to keep in mind when troubleshooting.

An easy method to test the hypothesis is to start an iperf session between two VMs, and change the layout accordingly. The bandwidth available between hosts will often differ between the memory bus and the network adapters provisioned.

For this example, we will execute an iPerf TCP test with default settings between 2 VMs on the same port-group, then vMotion the server to another host and repeat the test.

When constructing the VMware Validated Design (VVD) and the system defaults that ship with ESXi, the system architects chose a "one size fits most" strategy. This network behavior would be desirable with Gigabit data centers or edge PoPs, or anywhere the network speed would be less than the memory bus. In most server hardware, system memory buses will exceed backend network adapters' capacity, improving performance with small clusters. It's important to realize that VMware doesn't just sell software to large enterprises - cheaper, smaller deployments make up the majority of customers.

Shorter paths are not always desirable. In my lab, hardware offloads like TCP Segmentation Offload (TSO) are available and will make traffic more performant outwards. Newer hardware architectures, particularly 100GbE(802.3by), benefit from relying on the network adapter for encapsulation/decapsulation work instead of CPU resources better allocated to VMs.

This particular "feature" is straightforward to design around. The vSphere Distributed Switch provides us the requisite tools to achieve our aims, and we can follow several paths to control behavior to match design:

As always, it's important to know oneself (your environment) before making any design decision. Few localized Virtual Machines concentrate enough traffic to benefit from additional tuning. Real-world performance testing will indicate when these design practices are necessary.